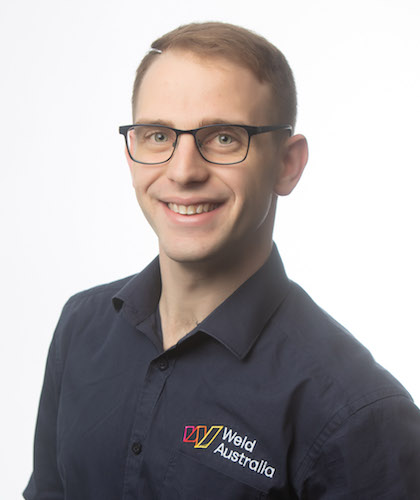 Adam has been a part of the Weld Australia team since 2017. He holds a Bachelor of Materials Science and Engineering in Physical Metallurgy at the University of New South Wales (UNSW) and is a qualified International Welding Engineer (IWE).

During his time in the Sydney offices of Weld Australia, Adam has worked with various departments within the company and has become an expert in new innovations for welder training and weld analysis tools (including augmented reality welding simulators). He currently operates a fleet of 10 welding simulators in the Caboolture region, QLD.

Whilst at university, Adam was awarded the Perfect Engineering Prize for Best Final Year Project in Physical Metallurgy. Adam also took on several volunteer positions, assisting with the ConocoPhillips Science Experience in 2013, 2014 and 2015; facilitating seven Science Shows for ‘A Day at UNSW’; assisting with the Materials Science Stall for the UNSW Open Day from 2013 to 2016; and acting as the Master of Ceremonies for UNSW Science in 2016.

Prior to joining Weld Australia, Adam completed a three month electrical engineering internship at Intelle Building Services. The internship specifically focused on the fitout of lights in office spaces. In this role, Adam designed the lighting layout, and calculated the resulting luminance.